With over 2500 performances in 19 countries during a unique career that spans over 30 years, Michael Peterson has had the good fortune to be:

• A million selling, Grammy nominated, Country music star whose songs have hit #1 on the charts five times including: the fourth most popular Country wedding song of all time “From Here To Eternity” and the iconic “Drink Swear Steal & Lie.”

• A songwriter for the stars with the

unusual good fortune to have had his compositions recorded by Hall of Famers and Grammy winners in Country,

• A contributing author for 8 books, including the #1 New York Times best selling “Chicken Soup For The Soul” series.

• The recipient of numerous distinguished public service awards including the prestigious Bob Hope “Spirit of Hope” medal from the USO following his 11 tours and over 150 performances for Service men and women deployed to Iraq, Afghanistan and South Korea

He and his wife, COL Jill Chambers U.S. Army (Ret) have a home in Las Vegas and currently reside in Branson Missouri where Michael is leading an All-Star cast as the Musical Director for the #1 rated concert experience in Branson “RAIDING THE COUNTRY VAULT.”

To celebrate his releases 20 years ago, Michael has teamed up with Steven McClintock from 37 Records to release a new CD called Drink, Swear, Steal and Lie. A collection of his hits, some country classics, and a brand new original song called Borderline”.  Produced by Steven McClintock and Michael Peterson and Billy Yates.

Most Beautiful Girl in the World

Too Good to be True

From Here to Eternity

When the Bartender Cries 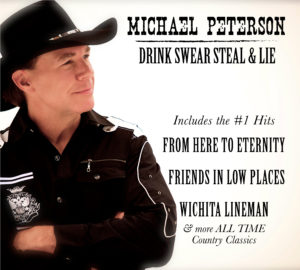 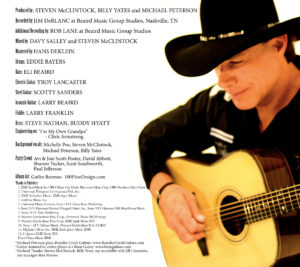 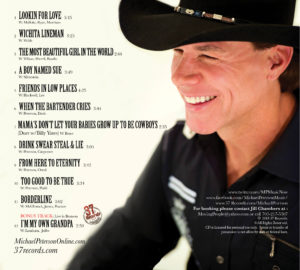 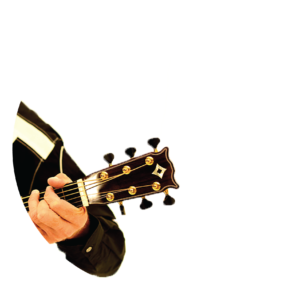