Michael Peterson has returned to his bad habits

Michael Peterson has returned to his bad habits 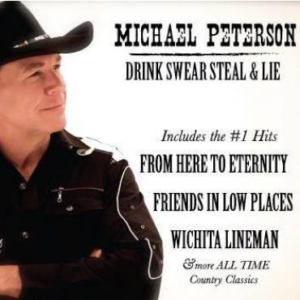 This review was previously published on Indie Voice Blog.

We shared our interview with country music great Michael Peterson to catch you up on what he’s been up to these past 20 years since he burst onto the country music scene with an album that spawned three #1 hits.

His latest album has just been released, entitled Drink Swear Steal & Lie.  The title track was one of those three earlier hits.  The album was produced by pop songwriting legend Steven McClintock, with the assistance of country music legend Billy Yates, and released on McClintock’s 37 Records label.

Peterson assembled some of the best players in Nashville for this project, including Eddie Bayers on drums, Eli Beaird on bass, Troy Lancaster on electric guitar, Scotty Saunders on steel guitar, Larry Beird on acoustic guitar, Larry Franklin on fiddle and Steven Nathan and Buddy Hyatt on keys.  Michelle Poe, McClintock and Yates provided backing vocals.

Review:  Michael Peterson is an award-winning country artist, who hit the top of his game on his first release on Warner/Reprise back in 1997, garnering three #1 hits, and five Billboard Top 40 hits, among other accolades.  He has now joined the ranks of indie artists with his latest album, which has already produced a #2 song (“Lookin for Love”) as well as the current #1 (“Drink Swear Steal & Lie”) on the European charts.  “Lookin for Love” has now been released in the United States as well.

What we love about this album is that Peterson has combined his tunes (including previous #1 hits “Drink Swear Steal & Lie” and “From Here to Eternity” with new songs “When the Bartender Cries,” “Too Good to be True” and “Borderline (written by producer Steven McClintock)) with his interpretations of classic country hits like Johnny Lee’s “Lookin for Love,” Glen Campbell’s “Wichita Lineman,” Charlie Rich’s “The Most Beautiful Girl in the World,” Johnny Cash’s “A Boy Named Sue,” Garth Brooks’ “Friends in Low Places” and the classic Waylon Jennings/Willie Nelson smash “Mama’s Don’t Let Your Babies Grow up to be Cowboys,” which was in itself a cover of the original Ed Bruce tune.  Peterson joins with producer Billy Yates on the duet, which makes this version a classic in its own right.

This is truly an album for all lovers of classic country music, and should easily restore Peterson to the top of his game.  The album even includes a bonus track, featuring Peterson on the classic 1947 Lonzo and Oscar novelty song, “I’m my Own Grandpa,” which was made famous by Ray Stevens.  Peterson’s version was recorded live during his performance at Branson, Missouri.

Recommendation:  You can’t miss with this one.  If you love classic country music, then this one is a MUST for your collection.  Get it today!