THE SPIRIT OF MUSIC

Judy Akin grew up with the legacy that her father left behind and always lived with the spirit of music in her soul. From the early age of 4, she has enjoyed being involved with various musical productions, stage presentations, civic theater productions, studio projects, T.V. and radio.

Both of her parents were actively involved in music productions and the ongoing cultivation of musical arts in Southern California. Her father, Kenneth (Kenny) Akin, managed his own studio on voice and dramatics, while producing and directing musical productions in Orange County. In Opera (“Madame Butterfly” “La Traviata” “Pagliacci” & many more) & Light Opera (“Kismet” “Chocolate Soldier” “Oklahoma” & many more) Kenny portrayed the lead tenor roles in numerous productions from Los Angeles to San Bernadino County. But, he had a vision for Orange County!!

Known as “Mr. Music of Orange County” Kenny Akin also toured throughout Europe to get a first hand report of theatre activities in an effort to help stimulate more music culture in Orange County. Unfortunately, he passed away before he ever saw the fruits of his vision or inspiration for a performing and cultural arts center…we now have today.

For over 30 years, she has continued her love of music through performing as lead vocalist for live jazz ensembles, “cover” bands and “Big Bands” throughout Orange County & LA. 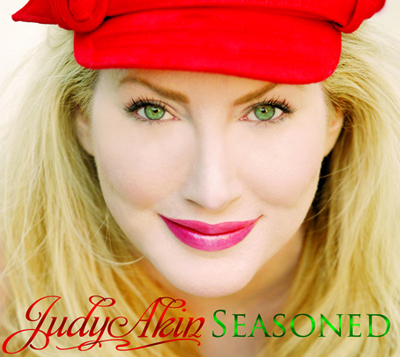 LISTEN TO JUDY AKIN ON:

She has performed in many productions for No Square Theatre in Laguna Beach in various roles including “Phyllis” in Follies, “Ella” in Anne Warbucks “Sweet Charity” “Rogers with Hart” concert: Songs of Richard Rogers and Lorenz Hart” “The World Goes Round” concert: Songs of Kender and Ebb” “Best of Bette” concert: Bette Midler hits “Country Radio Show WHIK” concert: singing as Patsy Cline. She has also been a co-writer for comedic parodies and performed in many shows for the “Lagunatics” productions.

Judy has also been a featured guest on “OC Now Talk Radio” with TV/Radio Host & Columnist, Cherri Farah 88.9FM – as well as local magazines and newspapers:

*Featured on “Eye on OC”

Judy’s 2006 release of her Christmas CD ”Seasons”, gives music to the world every single holiday.

Songs available on Itunes, Spotify, Amazon and hundreds of other stores across the world.